In the cleaning business, accusations of janitorial theft are rare, but occasionally, you will get this customer call: “We came in this morning, and widgets were missing from someone’s desk. We’re not trying to accuse anyone, but… only the cleaning people were here last night… so it had to be them.”

Yikes! How do you handle this situation?

When your company receives an accusation, the right way to handle it is to empathize with and listen to your customer, get all the facts, get your staff’s input, ask your customer how they would like you to proceed, and then make a decision. The wrong way is to get haughty, angry or blow up at your customer. All that will accomplish is a lost customer, a lost/diminished reputation, lost revenue and possibly criminal charges — even if your business was falsely accused.

I didn’t say doing the right thing is easy, or even comes naturally — but if you want to keep this customer, you have to remain calm and do right by them. Remember, it’s the foolish person that says everything that’s on their mind. Trust me on this one. I’ve played the fool with my mouth more than once, and the wrong thing happened every time.

With that said, and in the hopes of helping someone who may be new to the janitorial industry, I’ll share a few real-life examples of how I’ve responded to accusations of employee theft during my three decades in business.

Some perspective… I take pride in running a company based on integrity, honesty and doing the right thing, always aiming to be above reproach and never giving the appearance of wrongdoing. For starters, my staff is highly screened, background-checked, and instructed not to even take a piece of candy off of someone’s desk (even if it has a “Free Take One” sign on it). And I’m pleased to note that over the years my awesome team has turned in lost wallets, cash, cell phones, diamond rings, credit cards, checks, laptops, iPads, jewelry, and the list goes on and on. Out of thousands of employees spanning three decades, the number of janitorial theft accusations has been minuscule, to say the least. I’ve very proud of these good folks!

Do you want to know how to increase your janitorial customer retention dramatically? Silly question, right? Of course you do! But what exactly is “customer retention” and how do you achieve it?  In practice, customer retention is less about you keeping your existing cleaning accounts and more about having your customers not get rid of you. 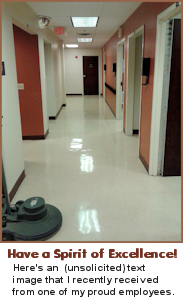 To acquire new customers, you spend a lot of time, effort and money to market and sell your services. Once you get a new customer, that’s just the beginning; Now you have to keep them!

Don’t think for a moment that just doing the basics and going through the motions will retain customers. A Janitorial Service Agreement is a business relationship that absolutely requires you to be attentive, nurturing, caring, loving – (yes, I said it, love your customer!) – and to occasionally bite your tongue. And just like any other relationship, it has to be nurtured and developed this month and next month and the month after that…

You actually need to move from “Customer Retention” to “Customer Loyalty” to thrive in this business. There’s a lot to be said on this subject (and I promise to to do so in future articles), but for now, let me start with my core “Customer Retention/Loyalty Tips” that have served me so well for over 25 years in this great janitorial industry.

The web-based CleanlyRun Janitorial Bidding Program guides you through a set of quick and easy steps - including our amazing pricing screen - resulting in ready-to-deliver proposals that enable you to win more cleaning business. Affordably!

Using powerful behind-the-scenes Business Rules based configuration technology -- technology that was previously available to large enterprise only -- you and your staff can bid like highly experienced experts.

The CleanlyRun Online Janitorial Bidding Program guides you through a set of quick and easy steps – including our amazing pricing screen – resulting in ready-to-deliver proposals that enable you to win more cleaning business. Affordably!

Using powerful behind-the-scenes Business Rules based configuration technology — technology that was previously available to large enterprise only — you and your staff can bid like highly experienced experts.